Custom Self Layering Hose Reel for Government, Mining and Defence

Reel Tech was asked to concept, design and construct a custom hose reel to hold 20 metres of Special 6 ” diameter hose for a high level government application. The brief was quite exhaustive, with both redundancy requirements and full testing to ensure the reel could handle Earth quake, load ratings and constant use. The reel needed to have the capability of being electrically driven in Zone 1 Class  Explosive environments, be self deploying and self rewinding without fouling at the touch of a button and if required could be declutched for full manual operation in case of emergency power fail. Another requirement was that it had to be easily serviced in the field.

Reel Tech, Australias largest supplier of hose and cable reel technology has again met the challenge of the design, construct and supply of custom hose reel technology for specialised automatic hose handling solutions; using their patented direct drive safer speed control gear box and a world first – The largest automatic direct coupled hose layering system called Flat Winder With Reel Tech’s vast experience with locally designing and constructing hose and cable reels for fire emergency, mining, military and aviation application, we were able to draw upon a standard architecture of there popular Pit Bull Series of hose reels. These custom six Inch reels would need to easy to use, robust but also reliably deliver all of the features of the government brief.

Reel Tech’s Ezy Deploy clutch system and integrated electrically driven direct drive gearbox was chosen to run the reel. Unique to this application was the largest Flat Winder self layering hose system that reel tech had ever made. With the reels standing over 2m high and almost 3m wide, these self layering systems were integral to the reels operating totally autonomously (payout and payback without catching) with the special six inch hose selected and without human intervention. With Reel Tech’s in House CAD design centre, they were able to model and show the client a 3D working concept after signing of documents, to prove feasibility and application.

The picture shows completed and tested reel. Meeting all the criteria and non destructive test regimes, the client was so impressed with the operation and reliability that they extended the final contract to Reel Tech for a further six custom hose reel systems. Reel Tech can supply a custom hose or cable reel handling system for any industry or application and has over twenty years experience in reel systems through its Australian and New Zealand Offices. 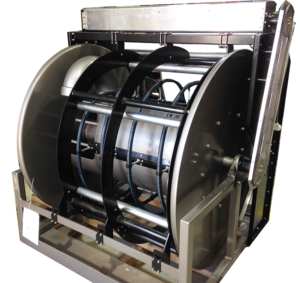 Hose Reels for Defence and Government